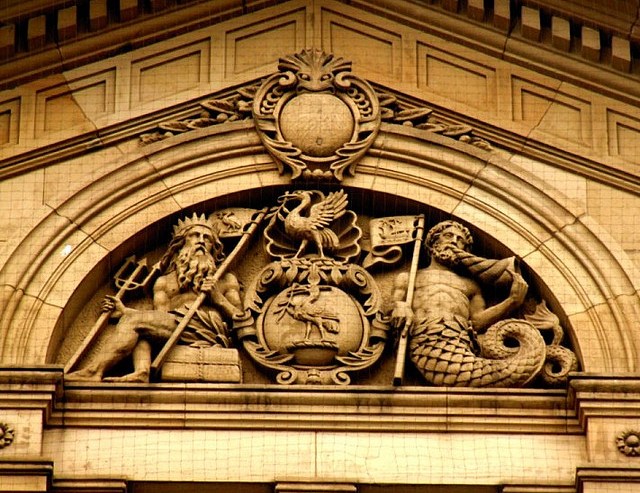 Want to fire up the Northern Powerhouse, Chancellor?  Bung £25m into a kitty and task Merseyside’s private sector with matching it, then re-launch the Bank of Liverpool.  Shareholders will make a fortune, says Dougal Paver.

Since the onset of the industrial age, 95% of the world’s trade by volume has been conducted by sea.  In my grandfather’s lifetime, Liverpool owned one seventh of the world’s shipping and in his father’s day its custom house generated a quarter of the nation’s entire revenue.  When in 1872 the post-war Yankee government finally negotiated a payment from the UK exchequer of $15.5m as punishment* for Liverpool’s role as home port of the Confederate Navy, London didn’t have the nerve to ask us for the money back.  We were just too important.

The city was a financial leviathan, sustained by its own banking sector and a deeply inter-linked business community that knew every player on the pitch and the worth of his bond.  Risks were shared, dividends paid, collective losses borne and great successes celebrated as the city’s rampant commercialism generated vast surpluses.  To this day it retains the largest wealth management sector outside London, with great merchant houses like Rathbone’s able to trace their roots back to 1742.

The city enjoyed 250 years of break-neck commercial expansion – interrupted by the odd war and recession – precisely  because it had the financial infrastructure to sustain itself.  Lenders knew the borrowers; syndicates shared deep networks and wells of trust; and a man’s reputation was everything.  The port was home to countless banks: the Union Bank of Liverpool; Martins Bank; the North & South Wales Bank; Heywood’s Bank; the Adelphi Bank and, of course, the Bank of  Liverpool, to name a few.  And then technology, commercial logic and the stock market conspired in their removal and slowly but surely the city’s financial autonomy bled away to London.

Thing is, those deep bonds of trust still bind Liverpool’s business community.  You play a straight bat or no bat at all in this parish and it remains a remarkably gentlemanly place to do business.  Disputes largely take place behind closed doors and there’s a tremendous loyalty to the city and its institutions.  And therein lies the opportunity.

If the Bank of Liverpool were to be resuscitated, with a well known local chairman and board and a wide network of local investors, it would clean up in a city where loyalty, relationships and civic pride still count for so much.  Imagine: no more lending decisions deferred to London or, worse, Manchester.  People who knew the firmness of your gaze and the grip of your hand making decisions as much on your standing and reputation as your loan-to-value ratio.  Imagine a Bank of Liverpool that lent and acted in Liverpool’s interest: you just know it would thrive.  Because, as with the eighteenth and nineteenth centuries, Liverpool’s interest is the shareholders’ interest.

So, Chancellor, are you up for it?  It’s fifty million quid for a banking licence: throw in £25m and I’ll persuade Liverpool’s private sector to stump up the rest, and recommend a darned good chairman and board, to boot.

*During the American Civil War Liverpool’s business community, with strong ties to the cotton-producing southern states, bankrolled the Confederacy, in particular its navy.  The Confederate war ship the Alabama remains the most prolific gun ship in world military history and she was funded and built here on the Mersey.

This rather miffed the Yanks and they sued for war reparations.  Lord Palmerston told them to get stuffed, but on his death it was a Liverpudlian, William Gladstone, who eventually conceded, signing the Treaty of Washington (1871) and stumping up a rather staggering $15.5m.  He didn’t dare come home and ask his former neighbours to cough up.  Sensible fellow.