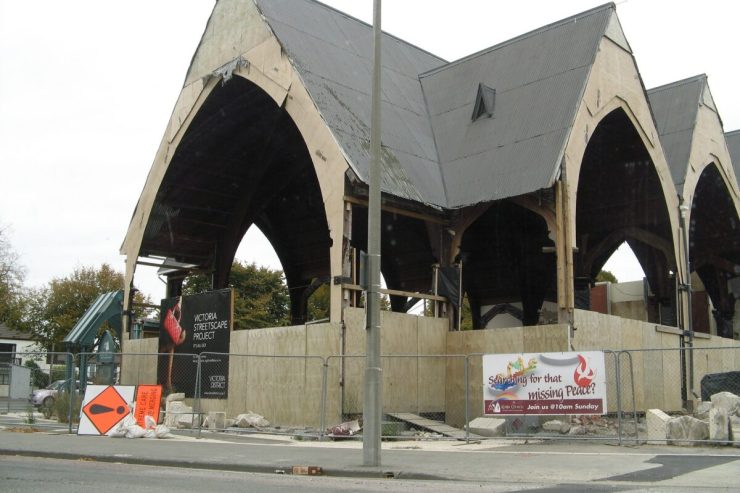 Christchurch's earthquake was no respecter of buildings, as this church learned

Just six seconds, that’s all.  It was Mother Nature having a burp, no more.  But 185 people died and most of Christchurch city centre went with them after its earthquake in 2011.  Four years later and some remarkable changes in its society and urban fabric are taking place, as Dougal Paver discovers.

Dancing.  And shipping containers.  Not the most obvious responses to urban devastation of the sort visited upon Christchurch and, to be fair, not the first thing folk thought about.  After they buried their dead and cleared the rubble, they set about recruiting the skilled workers needed to re-build the huge chunk of the city’s central and eastern suburbs that had been destroyed. The dancing and the containers came later.

Thing is, they are amongst the most popular and enduring responses to the catastrophe, taken to heart by the locals in a way no-one quite expected.  And evidence that, if civic planners have the courage to let their citizens in on the whole place making gig they can come up with some dazzlingly simple and effective suggestions that improve their city and society dramatically.

So, let’s dance.  Dance-o-mat, in fact, to give the idea its full name.  It’s what the locals call a ‘gap filler’ – an idea to bring gap sites where buildings once stood back in to productive (and usually temporary) use.  Lay down a mat, put up some bunting, paint a funky mural, haul up a juke box made out of an old laundromat and hey-presto! You’ve got yourself an open air community disco.

They come together in their droves, to line dance, to jitterbug, to cha-cha-cha or just chat, chat, chat – a blindingly simple community sticking plaster that has used the power of communal celebration to heal the wounds of that terrible February day.  Four sites have been used so far and the public’s appetite for a bit of open-air boogying has not waned one jot.  Sod you, Mother Nature, we’re having a ball.

Over in the city centre you’ll find more than fifty shipping containers hosting an array of funky, independent retailers and caterers, set within thoughtful landscaping and utilising the architectural nature of containers, together with clever façade and glazing treatments, to delightful effect.  It’s an intensely urban medium, effective in its setting and wildly popular with the locals.  Not just the locals, in fact – this, and the huge number of other off-the-wall innovations designed to kick-start the city’s central business district, have been credited with the city’s post-quake tourism boom.

The lesson for urbanists is that when humanity and creativity collide, the results work.  Call it the wisdom of crowds, or, inversely, the innate conservatism of planners.  Call it what you will, but in Christchurch it’s been a roaring success.