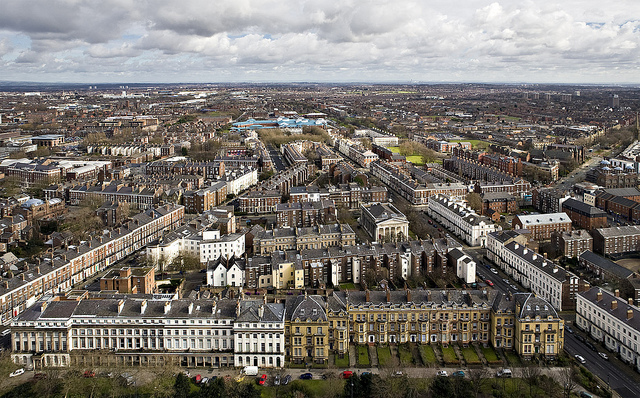 Our colonial cousins worry about suburbanisation far more than here in the UK, with a lively city-focused blogosphere debating how American cities can  boost population densities.  If their research is a guide, there are very clear social, health and economic outcomes.

Here’s a case in point from the admirable CEOs for Cities blog.  Everything we take for granted – liveable neighbourhoods, walkable streets, even pavements – remain things to be desired in certain American cities which succumbed to the might of the motor car and built sprawling, low density suburbs.  The impacts in terms of health outcomes are obvious for a population that drives rather than walks – extending to the startling statistic that you’re four times more likely to be killed in a car accident if living in suburbia than downtown.

Density seems only the preserve of the older east coast cities such as Boston and New York but before we bathe in a self-satisfied glow ’twas not always thus here in Britain.  Were it not for greenbelt laws constraining our suburban growth, there’s no doubt all our major cities would extend further than they do.  The movement back towards city living only began in the mid-nineties and in all our major metropolitan centres there’s much left to do before we see the sort of population densities taken as a given on the continent.

In my old stomping ground of Barcelona there are 41,420 people per square mile, almost four times higher than Manchester.  In Paris it’s greater still, at 55,000 per square mile. Of Britain’s major cities you’d image that only London gets close to such densities, but in fact it’s an extremely generous 14,200 folk to the square mile.

Much of our political discourse is about how crowded we are as an island and how our cities are congested and unliveable.  Not even remotely when compared to the continent.  And, as others point out, the benefits of density go far beyond mere health to include the efficient use of scarce space; the positive economic impact at street level of a greater population being able to sustain a more varied retail infrastructure; and the more widespread reliance on public transport.

For British cities, then, the prize of greater density is considerable.  Here in Liverpool the population of our downtown post codes has risen to around 40,000, driven by a growth in workers rather than students, as in other cities.  It will be denser still when all the student developments under construction and in the planning system are built out.  Yet the fact remains that the city – as with all others in Britain, it seems – could sustain far higher density than it does.