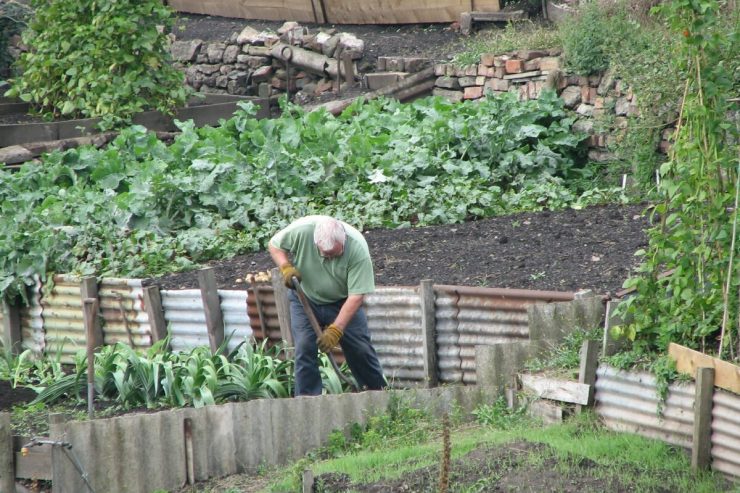 Now there's civilised for you

Allotments civilise cities, not just because of the obvious but because they slow folk down, suggests a mad-busy Dougal Paver.  He should know: he spent his youth on his grandpa’s lovingly tendered Tyneside plot.

I skinned my first rabbit aged nine and can still do it, when required, inside around 30 seconds.  I’ll spare you the gory details, but it’s a pretty nifty life skill when you’ve got kids to feed.  Free protein and, lest you’re inclined towards the sentimental, a farmer’s worst enemy.  Want to pay more for your carrots?  Then let Bugs roam free.

I mention all this because my grandfather was a remarkably resourceful bloke and kept rabbits so that he could make good use of the off-cuts from the cauliflowers and lettuce he grew on his allotment.  In return, free protein – a never-ending supply of it, in fact, given that mummy and daddy bunnies do what rabbits do best when left in peace.

Any miner who wanted one was given an allotment by the now-defunct National Coal Board and so it was that my Grandpa John and Uncle Raymond were proud leaseholders of a particularly fine example of the genre tucked behind East View in the centre of Boldon Colliery.

There was a pigeon loft built out of old planks and abandoned doors, affording a deck on which we would sit in quiet appreciation of the vegetables grown in rotation each season below us.  Beyond were the hen coops, but not for your common or garden Rhode Island Reds.  Oh no: theirs were bantam hens, smaller and therefore better suited to allotments, where they use up less space.  They’d lay up to 150 eggs a year each, although the economics weren’t that favourable because the eggs were smaller in spite of bantams scoffing as much scran as a normal-sized layer.

It was a revelation to this suburban kid sitting on that terrace listening to the manly talk of John and Raymond – impenetrable Geordie to all but those with an ear for it; an ear with which I was fortunately blessed.  When it rained, which was frequently enough, we’d settle on some battered old sofas in the dusty half light of the allotment interior, the walls festooned with peeling and mouldy pigeon racing certificates which got newer the further around the room you went.  You won a prize for fourth place upwards.

Raymond smoked rollies and those few teeth that remained were stained brown from the nicotine.  He’d been down the mine since he was fifteen and he figured a bit more shite on his lungs wouldn’t make much difference.  It didn’t: like my Grandpa John he lived on to his eighties.

I would love nothing more than rolling up my sleeves and plunging my bare arms deep in to the chest of rape seed they used to feed the pigeons.  A tingly half-tickle resulted that sent a pleasant shiver down my spine and no matter how often you repeated it, the sensation never dimmed.

When it was time for the pigeons to return from Kent or Dunkirque or whichever exotic corner of the world they’d been taken for release we’d sit on the deck scanning the fading sky for the first sign of a returning racer.  John could recognise his from the others, in spite of the fact that up to forty neighbouring lofts would have released birds, too.  He’d whistle and coo the birds to him, rattling four or five grains of corn in an old biscuit tin by way of incentive.  It would frustrate the Bejaysus out of him if the daft bugger stayed in the sky because the sooner it came down the sooner you could ring it to lodge your official time, but he rarely let it show.

I’d be watching quietly from an old rocking chair stroking one of his pigeons, a gentle, clean and beautiful bird that would coo in cat-like appreciation whilst we waited for its loft-mates.  It was magical and those times are amongst the fondest of my childhood memories.  Such contentment from such simple pleasures.

With a nine year old of my own now who can catch a trout on the fly, bash it on the head and gut it for his supper, I want the same for him.  Okay, maybe not a pigeon loft but an allotment, for sure.  And in Liverpool allotments are to be had in abundance, provided you don’t mind waiting five years to get one.

It’s a pretty civilised city, is Liverpool, but would be made all the more so if we had more allotments.  In the vast acreages of green space strung across our leafy south end surely there’s room for a few more?