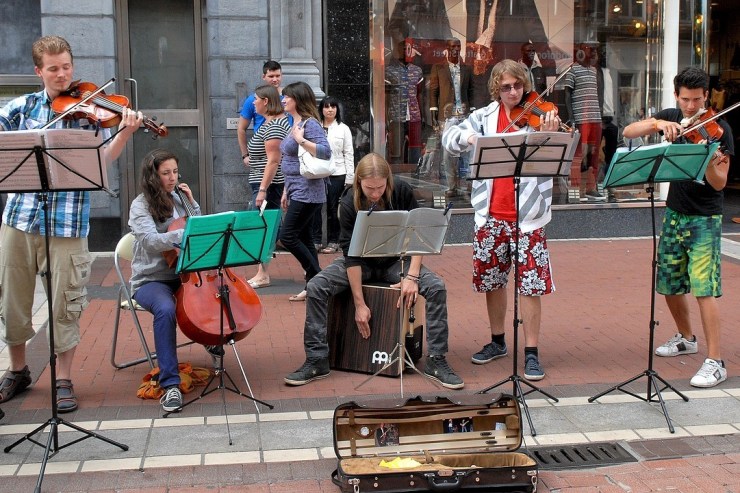 Grafton St, Dublin, where buskers know their music (if not their fashion)

Our regular guest blogger, John Flamson, offers an entertaining treatise on the merits, or otherwise, of trying to regulate the quality of buskers.  Enjoy.

A couple of years ago there was a peaceful protest on Liverpool’s streets about the council’s proposed rule to restrict the busking community.  The authority believed that compulsory permits for street performers would enhance quality and stop endless repetition of the same numbers.  But all this smacked of Big Brother and buskers warned that council enforcement officers would be turned into ‘a poor man’s Simon Cowell’.

Well, the council listened and in conjunction with the Musicians’ Union, the Keep Streets Live Campaign and the Business Improvement District it produced ‘The Guide to Busking in Liverpool’, which advises buskers, council officers, businesses and residents on pitch selection, noise levels and the best way of resolving issues.

Individualism has always been in the lifeblood of this city but I feel that the council were on to something when they questioned the quality of the product on the streets.

As a young man I got a sense of this city’s quirkiness during a poetry festival.  I was in Ye Cracke pub and had managed to wangle myself a free beer for a spontaneous stanza or two (‘it’s worth a half’ was the landlord’s begrudging concession – but you have to admit being ‘paid’ for being a p… artist was pretty cool).

Satisfied with myself, and clutching my well-earned half, I made my way to the back room where a Donavanesque chap was standing in Keatsian fashion while his seated, brooding Celtic mate played the bodhran. ‘Donavan’ proceeded to recite, and simultaneously strip to, William Wordsworth’s ‘Daffodils’: ‘I wandered lonely as a cloud’ (boom, boom – accompanied by the removal of a layer of clothing), ‘that floats on high o’er vales and hills’ (boom, boom) ‘when all at once I saw a crowd’ (boom, boom) ‘a host of golden daffodils’ (boom, boom) and so on. Poetry, striptease and music: even then I had a spooky feeling that I was being prepared for a life of public service.

Many years later Liverpool was rightly hailed as European Capital of Culture and subsequently also sought to identify itself as a City of Music.  The music epithet is more than marketing buzz.  Just look at the great events it has produced: Sound City; Creamfields; Liverpool International Music Festival and The Summer Pops.  Liverpool is a magnet for young, aspiring high achievers – whether popular performers or classical musicians, and our universities and LIPA are stuffed with talent.  And you only have to look at the local listings or visit some well-known bars in the area on certain days and you’ll be treated to fine music, in between the odd (and sometimes very odd) karaoke artist.  So, from Brahms to Beat, this is a city in touch with the highest standards.

But then you hit the street.  Okay, nostalgia kicks in a bit and we all miss the plinkety-plonk man with the cardboard guitar but does the music on the street reflect the quality of the music in the city?  Is it of the standard you’d expect of a City of Music?  A number of people I talk to think not.  Some believe there should be a ‘’no amplification’’ clause in any guide as buskers, no matter how worthy the cause, shouldn’t have to rely on big speakers to grab the attention of passers-by, drowning out other performers some 200 metres away.

But as soon as you start raising these issues people still get themselves in a bit of a twist, and before you start suggesting how it could be so much better they are uttering phrases like ‘council censorship’, ‘the people’s streets’ and ‘creeping corporatism’.  But good is good and bad is bad.  So how do we weed out (or simply tolerate) the bad and give more airtime to the good?

It’s food for thought and no doubt there are lots of other things we should do.  There’ll still be room for the impromptu, the amateur and the eccentric but there’d be a better balance and we’d be more likely to hear people saying ‘wow’ rather than ‘what on earth was that then?’ on their next visit to the city centre.  Perhaps some will be more lyrical (even if they do keep their clothes on): ‘So I say thank you for the music, for giving it to me’.

Editor’s comment: So it’s not just me, then: the buskers in Liverpool are largely poor quality.  Particularly those on Church Street who, frankly, spoil the experience of shopping there.  Our twin city, Dublin, knocks us in to a cocked hat and proclaims no such pretentions about being a musical city.  Galway, likewise.  Go spend a day on Grafton Street or Shop Street and you’ll see what I mean.

Funny how in the private realm of the Liverpool ONE estate, however, the buskers are of a very high standard.  When shareholders’ livelihoods depend on it it’s amazing how standards go up.  Time for the Business Improvement District to step up to the plate, maybe?