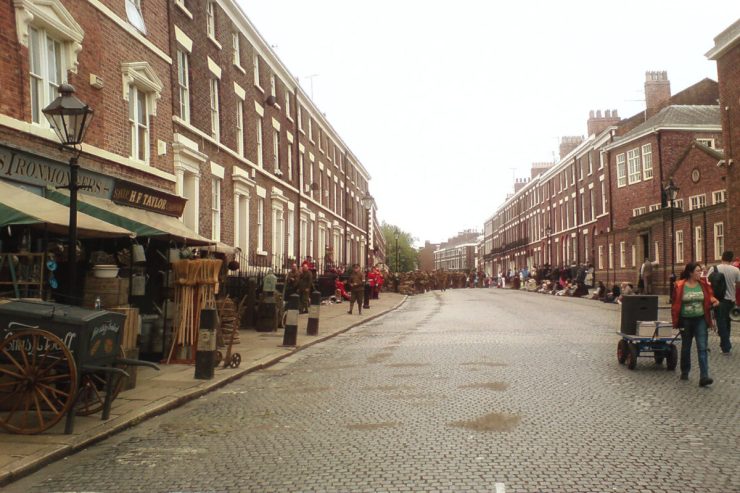 TV and movie production in Liverpool has become an industry in its own right, finds Dougal Paver. But whilst the headline numbers regarding total productions are impressive, the economic contribution seems small.

I spent much of yesterday working away on a client report from my dining room table whilst outside horse-drawn hansom cabs trundled up and down and young ladies sold heather to mustachioed passers-by wearing bowler hats. Big Talk Productions were in town filming a new drama called Houdini & Doyle for ITV.  Arthur Conan Doyle and the young escapologist were good pals, by all accounts, and Liverpool was doubling up as Edwardian London for the nth time.

Quite an industry has grown up as Liverpool’s stupendous architecture allows it to double as St Petersburgh, Dublin, Belfast, London and more.  From Elizabethan through Queen Anne, Georgian, Victorian, gothic revival, Edwardian merchants’ palaces and elegant art deco, Liverpool has more listed buildings than any city outside London and offers a backdrop for seemingly every occasion – including modern blight, old blight and inbetweeny blight.

According to the Liverpool Film Office this year alone 4 low-budget feature films; 7 high television shows; 4 medium television productions and 108 light entertainment programmes have been shot in Liverpool as well as 2 shorts; 13 adverts; 2 comedies; a couple of music videos and 10 corporate and multimedia videos. There were also 18 projects, not intended for broadcast.

And boy, is it labour intensive.  The amount of folk sitting around for long periods doing not a lot is something to behold.  Never mind starving young actors – they’re more likely to die of boredom.

Either way, there’s plenty of people needed to shoot just three or four scenes and much work for local extras, security guards and caterers.  But the kit was brought up from London, according to the phone numbers on the vans, and there weren’t any Liverpool accents amongst the senior production crew, it seemed. Still, a few hotels and bars must be doing a roaring trade whilst they’re up here.

The point is that the high value activity – the better paying jobs such as directors, producers, sound engineers, and all the post-production work – largely go to out-of-town folk and/or  are completed out of town.  Liverpool gets the low value part of the gig.

That’s not to decry the industry’s contribution.  It gives the city a PR beanfeast, if nothing else.  But without a proper sound stage and without a mature post-production capability in the city the movie industry’s overall contribution to Liverpool isn’t going to be what it could be.

All those films and programmes highlighted above are reckoned to have contributed just £9m to coffers in the city. Not a huge industry – certainly bigger in profile and prestige than in filthy lucre, for sure.  Still, it’s good to have them here and the PR value alone makes it worthwhile.