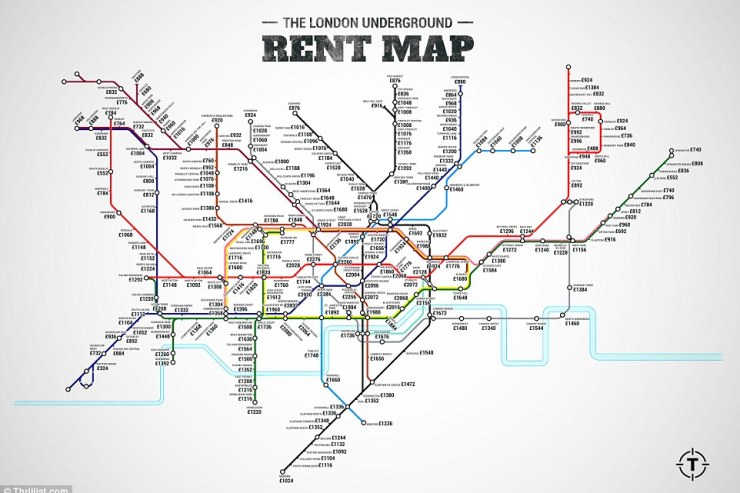 We love a good map here at Merrion and the one above showing London rentals by tube stop tickled our fancy.

All credit to the chaps at Thrillist.com for the analysis, not that the readers of the Daily Mail were impressed – check out their comments below the paper’s story, the gist of which is that they think the rents quoted are way too low.

This, of course, poses an interesting question: at what point does London start pricing itself out of the jobs market?

Now, let’s get a few things clear.  First, I love London.  It’s my favourite city by a long chalk and if there’s anywhere better I’ve yet to discover it.  Second, you won’t make the rest of the country wealthy by doing down London.  In fact, you’d make it poorer because 27% of the nation’s entire tax take is generated within the M25.

That said, were I a shareholder in a PLC with substantial back-office functions in the capital I’d be questioning the board long and hard on their justification for not transferring them somewhere more cost-effective.

Office occupation costs (which aggregate rent, rates and service charges) in the West End are an eye-watering £180 a square foot against around £25 in Liverpool.  To be fair, they’re a mere £97 a square foot in the City and a positively generous £80 in Canary Wharf.

But if that’s not enough to trouble shareholders – and it ought to be – factor in the human costs.  Not just the higher salaries which, for any sizeable business represent a substantial premium over provincial rates, but also the cost of recruitment and retention; the higher rates of absenteeism; and punctuality and performance issues compounded by the long and arduous commutes.

On that basis it doesn’t add up – except, of course, that it does because there’s a huge pool of talented labour to draw on and everyone’s making so much money that they don’t notice.  As a shareholder I’d argue that they ought to, of course.

But back to my question: when will London price itself out of the market?  Its booming population and the inability of most boroughs to meet their statutory housing targets suggest some sort of correction can’t be far off.  I advise London-based investors who are extremely active in the provinces – Liverpool in particular – because of the value on offer.  Cheap, well-tenanted buildings, high yields and rising capital values make for a very virtuous circle in their eyes.

They have no interest in investing in London and were it a normal city then that of itself would provide the cooling breeze necessary to take the heat out of the market.  But London is not normal: it’s the capital of the world.  Liverpool is the capital of North Wales.

There’s a wall of global money searching for London assets that has driven yields to silly levels.  For those in search of a safe haven they’re happy just to have tied their cash up somewhere where it won’t be confiscated and so yield isn’t really a consideration.  For global investment funds and wealthy individuals it’s often about the kudos of having a top London address in their portfolio and they take rising capital values as their justification for sub-2% yields.

All this represents a great opportunity for cities like Liverpool, which match affordability and yield performance with value on other input costs.  Throw in a thriving economy, a stable workforce, good civic leadership and great connectivity and you’ve got a recipe for success.  My London-based investment clients certainly think so.