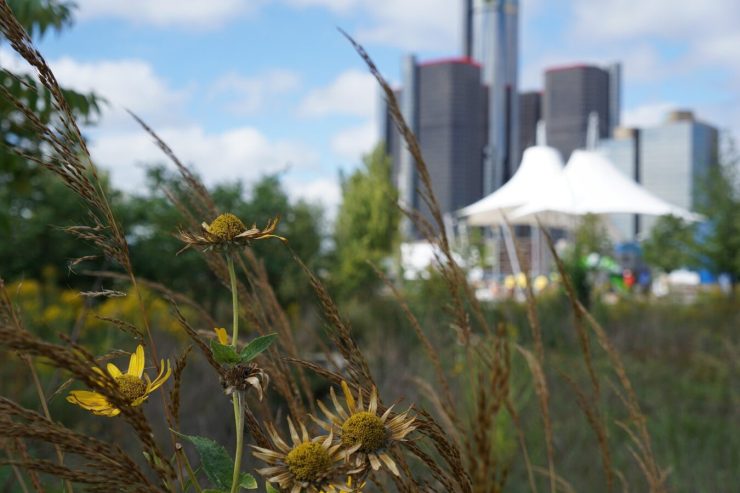 Grass. There's a lot of it in downtown Detroit

The doctrine of ‘managed decline’ still holds in some American cities, but was given short shrift in the UK by Margaret Thatcher and Michael Heseltine.  Good job, too, suggests Merrion Strategy MD Dougal Paver.

‘Right-sizing’ – the sort of euphemism for which Bullshit Bingo was invented.  And when players in Detroit shout ‘house!’ the irony is painful, for right-sizing is the city’s inelegant name for tearing down entire neighbourhoods in response to its population decline.

From 1.8m people Detroit has shrunk remorselessly to less than half that number,  hollowing-out the city’s tax base and leaving the local authority to try and provide services to those who remain.  Demolishing neighbourhoods was seen as a way of preserving and enhancing values in those areas that still retained a semblance of life whilst reducing maintenance and service costs across swathes of the city.   Grass costs a lot less to cut than pavements and streets cost to maintain.

And so ‘managed decline’ got its poster child, with the state’s destructive interventionism not even pausing for breath when the city declared bankruptcy on July 18th 2013.  A commission established by President Obama in 2014 recommended taking out another 40,000 of its houses.

The notion was tested elsewhere in America, too – to destruction, in fact, if you’ll pardon the pun.  As far back as 1965 they were hard at it in Cleveland, Ohio, using ‘controlled burning’ to take out entire blocks.  “I’d never thought I’d stand by and watch a place burn,” mayor Ralph Perk noted, “but this is a beautiful sight, isn’t it? It has such a cleansing effect.”

Despite compelling evidence that it does not work, leading academics still support the notion.  Here’s respected urban planning professor Galen Newman: “We need to accept that some of these big cities need to die.”

They don’t do it by half in America, do they?  Try saying this in Blighty:  “We need to accept that Middlesbrough and Stoke need to die.”  No, me neither.

Under the UK’s thirty years rule state papers released in 2011 revealed a lively cabinet debate, led by the chancellor Sir Geoffrey Howe, who advocated just that, but for Liverpool rather than the Potteries.  Howe wanted the government to facilitate the ‘managed decline’ of the Irish Sea port after two prolonged outbreaks of civil unrest and in light of its collapsing economy.

Fortunately for Liverpool Michael Heseltine and Margaret Thatcher were at the table and gave the notion short shrift.

“It never really got any traction for the simplest reason that the cabinet minister responsible for so much of the policy that affected the city was me,” said Heseltine recently.

“I simply wouldn’t countenance that you could say that one of England’s great cities, a world city, was going into managed decline here.

“That would simply be unthinkable to the approach that I believed to be necessary to a very important part of our history.”

Mrs Thatcher rejected Howe’s advice and despatched Heseltine to Liverpool as her ‘Minister for Merseyside’ and thirty years later the city’s Labour authority recognised the effectiveness of his work and his deep commitment to the task by making him a Freeman of the City.

But no-one could have imagined then that Liverpool would have been transformed in to a major tourism and convention destination, or that its port and automotive plants would boom once more.  Not even Heseltine, to be fair.

“I remember Liverpool in the 1980s, and it would have beggared belief that the city would one day be regalvanised to such an extent,” he recently told Place North West.

No-one can predict how things will turn out; how technology will transform our society and economy; how declining cities can contain the seeds of their own rebirth.  So deliberately managing their decline rather than investing in their potential seems folly.  But they’re still at it in America.

Here in Britain we believe in interventionism as a means of helping create the conditions for people to innovate, to take risks and to make bold moves, because we’ve seen it work.  In Manchester, in Liverpool, Glasgow, Newcastle, Leeds and Birmingham.  There’s still much to do across all those cities, but compared to the deep despair of the 1980s we’ve come on leaps and bounds.  Here’s to the risen.