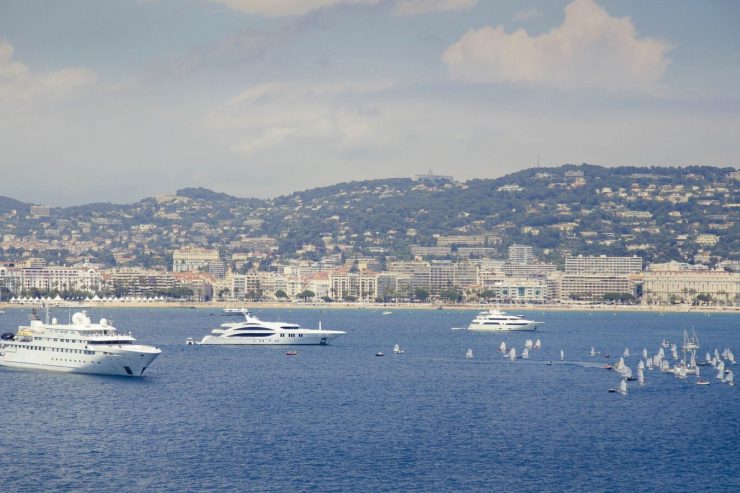 This is what a water taxi looks like at MIPIM

Tens of thousands of high-spending property folk descended on Cannes this week for the MIPIM real estate shin-dig and Merrion managing director Dougal Paver braved the warm Mediterranean sunshine and endless champagne and canapes to bring readers the inside track.  His conclusion?  The French are bonkers.

Convention cities the world over would give their eye teeth to host a conference like MIPIM.  More than 30,000 expense-account delegates turn up for an average of three days – many for five – and scoff trawler-loads of seafood in Cannes’ string of delightful harbour-side restaurants.  Amidst the feasting, deals are done, gossip exchanged, new contacts made and relationships solidified, mostly at a frenetic pace.  It’s speed dating on champagne, for the pin-striped classes.

The whole thing’s hugely enjoyable but also invaluable for anyone of standing in the real estate sector.  But the greatest value is gained by the town of Cannes, which guards this jewel in its convention crown with – as we shall see – unseemly zeal.  It has a long-term deal with organisers REED Midem that has secured the convention’s place in the civic calendar for years to come and many’s the citizen that profits handsomely from the arrangement.

An unofficial ‘fringe’ has grown up around the main event, as is the case with many international events of renown, Edinburgh Festival being the most famous example.  Several thousand additional visitors pour a few more million euro in to the Cannes economy by way of hotel, bar, taxi and restaurant bills but rather than pay the somewhat ripe fifteen hundred pounds to gain access to the pitifully-unmodernised convention centre, they meet with friends, clients and contacts outside in places like the legendary Caffe Roma or Chez Freddy.  You don’t see their owners complain.

But France is a country of petty rules, of an over-bearing bureaucracy and a crushing public sector.  I’ve blogged before about its terminally sclerotic economy and how the firm grip of the State’s dead hand has turned London in to France’s sixth largest – and possibly most dynamic – city.

And at MIPIM you quickly learn why many of France’s brightest and best leave its gilded shores.  This is not a place that welcomes free-wheeling enterprise.

Think that’s a bit far-fetched?  Then try this anecdote, relayed to me with incredulity on Wednesday by the director of a major UK Plc.

His team had organised an event at one of the main hotels in Cannes to brief its guests on a key subject.  All the hotels work hand in glove with the council and REED Midem to pull together what is, after all, a very complex and impressive event.  At the doors to this particular function,  therefore, were official staff scanning delegates’ badges, presumably so that they could build data on who was attending what type of event outside of the main convention hall.  Delegates without a pass were cheerily invited to throw their business cards in to a vase and welcomed to join the fun.

Now, let us pause and remind ourselves that these ‘unofficial’ delegates are pumping a few thousand pounds per head into the Cannes economy during their stay.  More than an average householder will do in a month, I suspect.

Yet by the afternoon, each and every one of them had received an email fining them approximately one thousand five hundred euro for attending a MIPIM event without having bought a pass to the conference.  You may wish to read that again to satisfy yourselves it’s not a typing error.

Now, I have not seen the email, but the staff from the Plc with whom I was in conversation had and had also received aggrieved phone calls from their guests worried about what to do next.

The main purpose of MIPIM is to attract inward investment to destinations and many a French municipality – as well as the French government itself – had taken stands at great expense to extol the virtues of France as a place in which to invest.  And let’s be honest: it’s a beautiful and hospitable place.

But they may as well not have bothered, because stories like this become legend pretty quickly and millions of pounds of marketing spend a year won’t shift the perception that France is not only closed to free enterprise, but positively discourages it.  After all, the UK property sector still remembers when consultancy Drivers Jonas was fined £90,000 by a French court in 2010 for ‘parasitical behaviour’ for hiring the Pavillon Croisette restaurant to entertain clients on their way to MIPIM, rather than buy entry passes to the event.

And therein lies the rub: the people who attend MIPIM are key influencers in a multi-trillion pound global industry.  They talk to their peers, to journalists and to the wider business community about the lunacy of this – and the result is that France is a laggard in global inward investment which, along with the country’s insanely complicated employment laws, condemn millions of its people to a life on the dole.

PS.  For the avoidance of doubt I was a fully paid-up delegate at MIPIM 2017 as part of the Liverpool delegation.  And excellent it was, too.