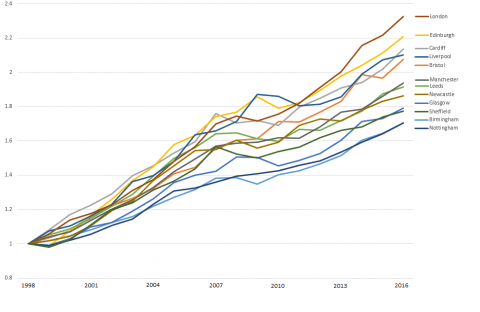 Outside Britain's three capitals, Liverpool is the clear leader in growth on a ten year basis. Well, well, well...

Here at Merrion Towers we love charts and graphs that cast a light on the quirky, unusual or just downright interesting.  And those fine fellows at City Metric  have come up trumps with the one above.  So, which economy in the Northern Powerhouse do you think is the daddy-o?

One of the great ruses in PR is to offer the media something that challenges a long-held belief.  If you can show up a cliche or prejudice in an illuminating way, then all to the good.

And so City Metric’s tweet last week demonstrating which city was top of the Northern Powerhouse table over the last ten years for economic growth must have appeared in my timeline two dozen times via enthusiastic re-tweets.

The city loses out routinely to Manchester for the sort of footloose office-based jobs that used to be its mainstay, but its economy is robust nonetheless.  It’s playing catch-up, of course, from a lower base than its competitors having been hollowed out in the seventies and eighties, but the economy is diverse and levels of company formation and survival are in a different league from where they were even twenty years ago.

There’s much left to be done and you get a sense the economy may be pausing for breath right now.  If Liverpool win the Champions League then expect a huge boost to its tourism economy as the additional profile sees people putting it on their ‘must visit’ list for the year.  As a businessman as much as an Everton season ticket holder, I wish our friends across the park the best of luck.