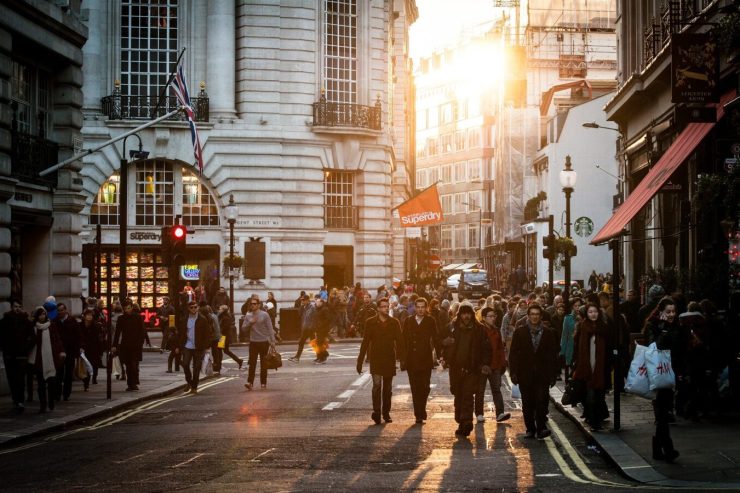 It's busy down in dat der London.

New housing starts can’t keep pace with population growth in the UK, and the social and economic consequences are now being felt broadly across our cities.  Surprisingly, argues Dougal Paver, the public aren’t joining the dots.

This blog doesn’t do politics.  Shoot me, in fact, if it ever does.

Rather, it likes to cast its eye over the quirks and statistical oddities of British urban life, like pub density and football allegiance.  Plus stuff about my home city, like its brewing revolution.  But politics?  Nah.

It takes willpower to avoid it, to be fair, because politics – good, bad and indifferent – casts its shadow over our great urban centres and their economies as sure as night follows day.  And right now there’s a national political issue that is placing huge strain on local services and on housing provision to which councils – through their Local Plans – are compelled to respond.  That, of course, is the UK’s accelerating rate of population growth.

Whitehall sets housing targets which councils must meet, in part so that the burden of population growth is shared reasonably equitably.  So everyone is, to a greater or lesser degree, impacted on by the need to take up scarce land for housing.

Having handled numerous public consultation exercises for house builders in my past life  I can tell you, however, that objections to new housing are anything but universal.  In many places house building is welcomed because it fosters regeneration; it removes blighted sites; and because it generates jobs and rateable income for hard-pressed communities.  In others?  Look up the words ‘nimby’ and ‘banana’* and you get the picture.

Is population growth a bad thing, per se?  Given our rapidly ageing population, we need fresh workers or our economy will stagnate, and then contract.  That would already be happening in Scotland were it not for inward migration, and what price independence in a country with little oil, low levels of entrepreneurship and an ageing and declining population?

The world’s most exciting cities – those with the most energy, enterprise and vitality – are the great immigrant melting pots of London, New York, Sydney, Toronto.  By contrast, 97% Anglo-Celtic Merseyside has seen its population fall by 350,000 in the last thirty years.  Just imagine what a bit of immigrant economic pep might have done to halt that.

The UK population is now 65m and set to rise to 73m within the next twenty years, according to official forecasts.  Fact is, people want to work here – and they can.  An open economy with an enterprising culture is always going to generate more jobs than the alternative – just ask the French.  And with that fresh injection of entrepreneurial fizz comes the need for yet more workers and so here we are on a virtuous cycle of economic and population growth.  Virtue, however, is in the eye of the beholder.

The thing that always amazed me at those public consultations of yore was that no-one ever seemed to ask why.  Why do we need to build so many houses?  Yes, we know we have a growing population, but why is it growing?  They don’t alight upon the two root causes and simply single out the house builders as being in the pay of Beelzebub and worthy of nowt more than a public flogging.

The reasons are simple: first, because 443m people can move to the UK tomorrow without asking permission.  Free movement of labour is a central tenet of the EU.

And second, because many of them live in countries with corrupt governments, sclerotic economies and pitiable health services and rather fancy a slice of our lifestyle, political stability and success.  So guess what?  They come in their millions and who can blame them?  As someone who’s lived and worked abroad it would be a tad hypocritical of me if I did, for starters.

London is already France’s sixth largest city.  It’s Ireland’s second largest, and one of Poland’s top five.  We’re adding a city the size of Bristol every year and population growth on this scale would stretch any country, never mind a small, rainy island like ours.  Those of you troubled by this can do nothing to stop it.  Except, of course, vote to leave the European Union.

There, somebody shoot me.

*banana – build absolutely nothing anywhere near anything