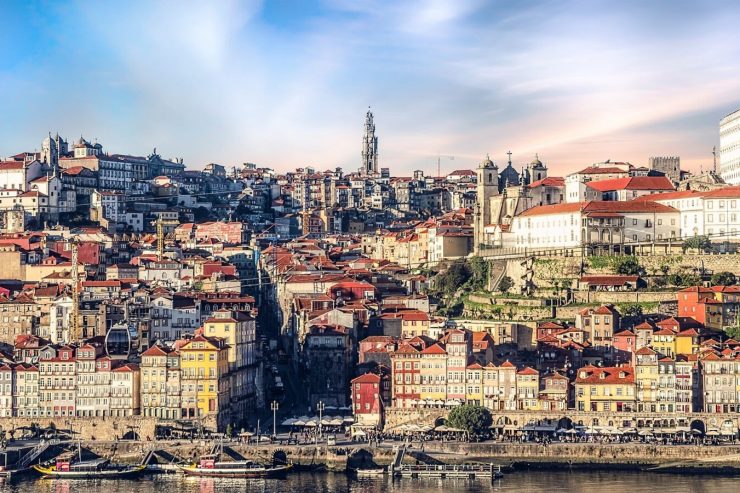 Porto: the jewel on the Douro. It just needs a bit of polishing

Porto is Portugal’s second city and was long held up as its industrial and commercial powerhouse.  But the figures – and the evidence of his own eyes – don’t convince Merrion MD Dougal Paver.

For one of life’s great puzzles head to Porto in northern Portugal, the city that gave it’s name to  your Aunty Pat’s favourite Christmas tipple.

Wander around its vertiginous mediaeval streets and soak in the beguiling atmosphere, then head across Eiffel’s famous bridge to enjoy the view above from the delightful Cais de Gaia, before asking yourself this: how can such a stunningly lovely city be in such a ruinous condition?

The city centre is battered and bruised, to put it mildly.  Street after street of gorgeous stone buildings, enlivened by the city’s famous azulejos blue tiles, look in need a major dollop of TLC.  Shop fronts remain untouched since whatever date they were first proudly opened by their familial proprietors, and even many of the major office blocks look desperately in need of the Bruntwood touch.

It’s a kip, frankly – but the loveliest, most fascinating kip you’ll visit in a long time.  And it’s why the Paver family are booked in there – again – for part of our summer holidays.

But this blog isn’t about tourism, it’s about cities and their regeneration, and there’s not much regenerating going on in Porto, which is a crying shame.  The figures hold a clue: Porto’s GDP per head is just $21,674 against  $32,434 for Lisbon.  In the Portuguese context, this town just doesn’t work.  A famous study in 2006 placed it last amongst Portugal’s 18 largest municipalities for competitiveness, causing huge upset on the banks of the Douro.  Given that that study came just over a year before a crushing recession from which the Portuguese economy has yet fully to emerge, it’s a fair bet that things won’t have changed much since then, either.

There are glimmers of hope, though, and as with all regeneration they combine set-piece investments with small, building-by-building refurbishments that give neighbouring owners the confidence to dig out the Dulux.

The city’s airport is a gleaming affair, courtesy of the 2004 European football championships, and handled 9.4m passengers last year.  Its tram and metro network is similarly modern and swanky.  So where’s the private sector investment to match?  The most obvious sign is not actually in Porto, but its neighbour across the Douro, Gaia, where the famous Port lodges are to be found.  Four gleaming glass pavilions, set within a beautiful quayside greensward, are filled with bars, cafes and restaurants on two levels, allowing visitors to gawp at Porto’s historic waterfront.

But for set-piece private sector regeneration in the city centre that’s more or less your lot, so it’s back to the refurbishment of individual buildings – and it’s tourism which, for now, offers most scope for tidying up Porto’s higgledy-piggledy patchwork.  And therein lies the rub: given the topography, most of the buildings lack relative scale, modernity and the efficiencies that appeal to institutional investors.  So they’re still owned by families and small enterprises who have clearly prioritised things other than a lick of paint.

But it makes real estate relatively cheap and a canter around Airbnb will show you that some of the smarter locals have spotted Porto’s potential to become the next Barcelona (yes, it really is that good) and are crafting some delightful refurbishments from amidst the city’s plentiful stock of heritage buildings.

The same thing has been happening for the last thirty years in Liverpool, picking up pace dramatically around 2003 and, after a recessionary pause, going full gangers again.  There’s a good twenty years’ opportunity left in Porto, I’d say, so if you’ve got a few bob and want to ride the coming tourism boom, get stuck in.  You heard it here first.