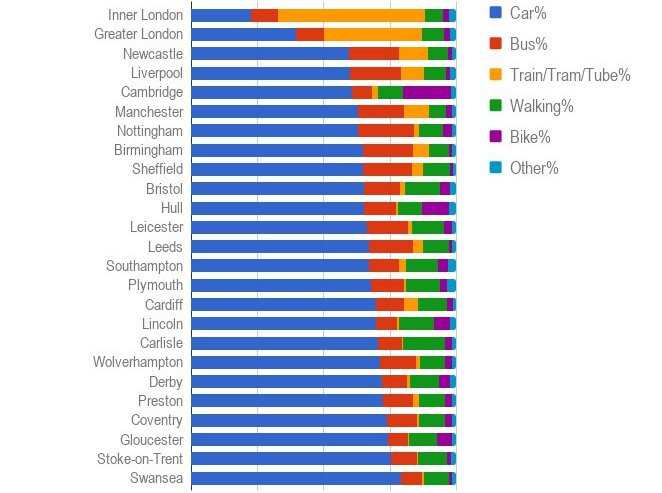 Public transport use is about the opportunity-cost of getting across town, not provision

The scale and quality of public transport provision in a city matters most where its economy is growing like Topsy.  Just examining the raw data doesn’t tell you the whole picture, argues Merrion MD Dougal Paver.

We love a good map or chart here at Merrion Towers.  Geography ‘O’ level: it never leaves you.

And so I had to dive in to the bar chart from David Ottewell above when I saw it on my twitter feed, which focuses on my specialism of cities and urban regeneration.

I fear David may be off-beam when he claims that only London has proper public transport.  He’s confusing scale of usage and provision with the opportunity-cost associated with crossing a large conurbation.  Londoners use their wonderful bus and tube networks because they’d be mad not to: the capital’s scale makes it so much faster, easier and more convenient to do so.

Yet Newcastle and Liverpool have got comprehensive combined underground/metro networks, as well as extensive bus provision and both modes are very popular.  It’s just that the much more manageable scale of those cities and their smaller city centres makes commuting by car far easier and faster.

In my experience, where a comprehensive, integrated public transport network really comes in to its own is in helping rapidly-growing city economies fulfil their potential.  Provision, of course, tends to lag growth given the timescales involved in planning, funding and constructing tram or tube networks, but the point is well made.  Just look at Dublin, a conurbation of roughly 1.4m with a population density of just 12,460 people a square mile: the place is almost permanently gridlocked, in spite of huge investment in its Luas tram network, port tunnel, Quality Bus Corridors and suburban rail network.  Every bus and tram is chocker, believe me, but infrastructure just hasn’t managed to keep pace with economic and population growth and so car use remains a key part of the transport mix.  I’ve written about it before, back in 2015, and at least since then a new government has revived plans for a metro line out to the city’s airport.  Meantime, the Irish capital remains a tough place to get around for such a modest-sized city.